The general principle of operation of an aluminum oxide sensor, for the measurement of moisture in air and gases, is well documented but the actual construction of this type of sensor, which varies widely from manufacturer to manufacturer, is critical to the performance and reliability of systems in field operation.

Certain manufacturers have resorted to catchy marketing phrases such as Hyper Thin Film Technology, Ceramic and Silicon Sensing Technology (which are simply aluminum oxide sensors on a substrate) and Thin Film technology, to demonstrate their technical competence. However, in the final analysis, the performance and stability in the field of the end product is the key test.

Edgetech Instruments sensors have 3 major advantages over other sensors, all of which are due to the manufacturing techniques used in the construction of the oxide layer. These advantages are:

The basic construction of the sensor consists of a high purity aluminum base, the surface of which is chemically oxidized to produce a pore filled insulating layer of partially hydrated aluminum oxide. A porous but conductive gold film is then deposited on the oxide layer with the gold film and aluminum base forming the two plates of a capacitor. 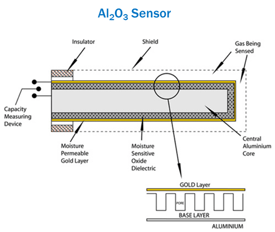 The oxide layer that forms the dielectric separating layer of the capacitor is in the form of a mass of tubular pores running up, from the Base Insulating Layer, to the exposed surface. The manufacturing technique used in the formation of this structure allows both the formation of the Base Insulating Layer and the pore dimensions to be precisely controlled.

1. Response specific to water vapor.
The pore size is controlled to be nearly specific to water vapor. In operation, water vapor molecules enter these pores and, due the pore size, their Brownian motion is limited, allowing the water molecules to adsorb onto the aluminum oxide pore walls. The very high dielectric constant of water causes a measurable change in the capacitance of the sensor and the amount of adsorbed water within the pores is directly related to the moisture content of the gas surrounding the sensor.

Other gases with smaller molecules, such as hydrogen, will enter the pores but their dielectric constants, compared to water, are so small that they have an insignificant effect on the measurement. Other gases with high dielectric constants, such as methanol, have larger molecules than water vapor and cannot enter the sensor pores. Therefore, these have no effect on the measurement.

2. Field Span Verification (FSV)
The technique that gives control of the pore size also allows precise control of the pore capacity, therefore the upper limit of adsorption can be pre-determined. In operation, a dynamic equilibrium is maintained between the water vapor pressure surrounding the sensor and the adsorbed water within it, thus controlling the overall capacity of the sensor determines the upper measurement limit. Therefore, a sensor designed for an upper range limit of 0°C dew point will saturate at this level and give no further output as the dew point increases beyond that level. This is why ‘FSV’ works.

When using the FSV feature, as long as the exposed dew point (ambient or other humid gas source), is wetter than the pore capacity of the sensor, the actual moisture level of the exposed source does not affect the field span verification or adjustment. The pore capacity is equal to the span, or wet-end, of the sensor’s/transmitter’s calibration. When following the FSV procedure and adjusting the reading of the transmitter to the span value (i.e. 0oC dew point) of the calibration, the FSV feature adjusts the calibration curve closely back to its original curve. This procedure can be done whenever there is a possibility that the transmitter’s calibration curve as shifted, usually due to some slight contamination. If gross contamination occurs, the sensor may need recalibration at the factory or replacement.

3. Free from low dew/frost point drift
Huge importance is placed on the size and shape of the primary pores of the sensor, which are critical because they determine the sensitivity and speed of response of the sensor. However, with other manufacturers, very little attention appears to be given to the construction of the Base Insulating Layer of the sensor.

The construction of this Base Insulating Layer determines the base capacitance of a sensor. Uniformity of this layer is critical for a reliable, stable and drift free sensor.

Pores or cracks in the Base Insulating Layer act as capillary pores which absorb and desorb water molecules in the same way as the primary pores, although at a much slower rate. Therefore, sensors with this construction defect, when used in continuous ‘dry’ conditions, for instance, will shift calibrations as these capillary pores dry out. This results in sensor drift and in this case the sensor will indicate dryer dew/frost point readings than actual – eventually, in some cases, reaching sensor signal levels below the lower calibration limit of the sensor, leaving the instrument to constantly read the lowest programmed dew/frost point value.

In addition to being relatively slow to dehydrate (dry down), this layer can also be slow to re-hydrate (wet up), giving the impression of a flat spot, i.e. where the sensor is very slow to respond, or does not respond at all, to an increase in moisture level at low dew/frost points.

Other manufacturers’ aluminum oxide sensors operating on an impedance circuit will show an exaggerated drift caused by this effect, especially if the capillary pores in the Base Insulating Layer extend to the aluminium core, as this would increase the resistive effect of the sensor.

Many years of development have resulted in a sensor with a very stable evenly constructed Base Insulating Layer which eliminates dry-end drift and does not demonstrate a flat spot response following continuous operation in dry conditions.

As discussed previously, the primary pores of the sensor are responsible for the speed and sensitivity of the sensor. Our continuous research and development program has resulted in our capability to manufacture sensors with uniform and water vapor specific pores, giving large capacitance changes and rapid, predictable response together with a designed pore capacity which facilitates the invaluable FSV feature.